The classrooms, colleagues, and lessons acquired over two decades of study at George Mason University are never far from the thoughts of Dr. Ron Ritchey. As the Chief Scientist of Internet Security and a senior vice-president in the Global Information Security division for Bank of America, Ritchey draws upon an array of academic and professional experiences for his work at the bank. 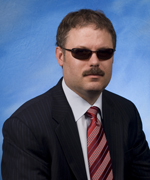 Ritchey, who earned his BS and MS degrees in computer science and PhD in Information Technology from the Volgenau School of Engineering, heads up a team who works to keep the bank secure. A computer aficionado since his teens, Ritchey spent his childhood bouncing from state to state as the son of an Air Force officer. His family landed in Springfield, Virginia and he finished high school there and began his CS studies at George Mason University.

In the mid-1990s, Booz Allen Hamilton’s cyber-security team hired Ritchey. He spent 13 years there and by the time he left in 2011, he oversaw 150 security professionals. “The amount of expansion on that team while I was there was amazing,” he recalls. While at Booz Allen, Ritchey was a full-time student. He hadn’t intended to pursue a doctorate but he stumbled upon a research area that fascinated him. He developed a technique to automate the creation of network attack graphs, which show how adversaries can work their way through a computer network. He and his colleagues and faculty advisors expanded the idea to scale to a real world network. After Ritchey graduated in 2007, Mason received grants to further develop the technology, patenting it and selling it to companies along the way.

While working on his PhD, Ritchey also was asked to design a software security course and joined the school as an adjunct faculty member. “Teaching is something I truly enjoy,” says Ritchey. “I feel my ability to bring real world scenarios to the classroom keeps the content fresh and relevant to students and better prepares them for what they are going to find when they go to work.”

In addition to teaching at Mason, Ritchey has also taught courses at the SANS Institute and the Institute for Applied Network Security, training organizations for information security professionals. While his workload at Bank of America has limited his teaching at Mason, Ritchey stays involved with the university. In May 2013, he was honored as the Volgenau School Alumni of Year for his contributions. He also serves as Chair of the Computer Science Industrial Advisory Board, a group of industry professionals tasked with helping the department develop curriculum, seeking ways for companies to work with the department and students, and promoting the school to the larger academic and professional world.

Ritchey enjoys staying connected to former professors and new trends in Internet security research. “A lot of work we do today involves testing and research,” says Ritchey. “I still enjoy getting down to the code-writing level of projects, though I don’t have the time for as much of that anymore. It’s valuable for me to be able to reach out to my professors and just stay connected to their current research.”

Yet the rising tide of criminality on the web means that academic theory has to translate into actual tools and strategies. Ritchey relishes the opportunity and challenge: “There are other organizations I could work for that are smaller, but at the bank I’m able to use my expertise to protect employees, customers and shareholders.”