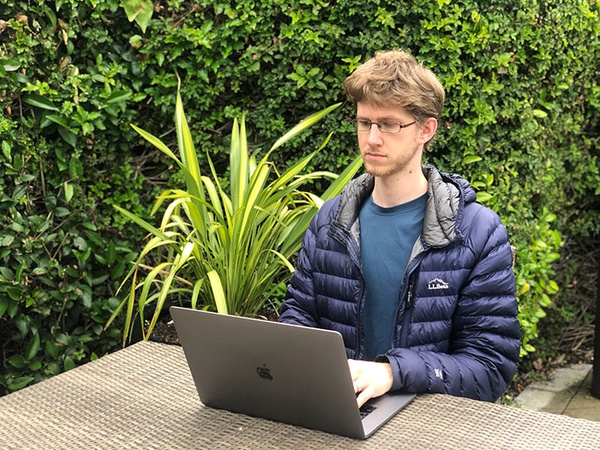 Mason alumnus Joey Meyer developed an appreciation for using his imagination to build ever since he was a child fascinated by Legos. After graduating from McLean High School in Virginia, he still wanted to create, and earning an engineering degree was his goal.

He enrolled at George Mason University but still thought about attending Virginia Tech. After taking a few classes at Mason, though, “I realized that George Mason had a really strong computer science program that was on par or better than Virginia Tech,” Meyer said. “I figured it would be worth it to stay.”

He’s glad he did.

Meyer, who earned his bachelor’s in computer science from Mason’s Volgenau School of Engineering in 2012, is now a software engineer at the tech giant Apple, where he works to make user experiences more intelligent on Apple operating systems.

How did Mason set him up for success in Silicon Valley?

“How didn’t it?” Meyer said. “The foundation for everything that I do on a daily basis, I learned at Mason.” That includes writing code, data structures and algorithms.

His classes with award-winning professors not only provided the foundation for his learning, but were inspiring, as well. He particularly enjoyed Sean Luke’s class.

“He had a different approach to lecturing, and you could tell that he lives and breathes computer science,” said Meyer, who felt he also picked up on Luke’s contagious enthusiasm.

“Once I started taking computer science courses, I would stay up late at night working on [projects]—not because I had to, but because it was cool.”

That held true inside and outside of the classroom.

When Meyer attended a guest lecture on campus by author Jullien Gordon, he approached Gordon about building an iPhone app for the book that he cowrote: “101 Things To Do Before You Graduate.” That led to Meyer creating even more apps for local clients and companies in the Washington, D.C., area, like LivingSocial, and connecting with fellow students who were passionate about similar projects.

Meyer continued to make strong use of Mason’s location, which is home to one of the largest concentrations of technology firms in the nation, as an intern for a local company where he further developed his programming skills.

One opportunity led to the next when Meyer’s coworker told him about an 18th-century machine that could play chess with humans. Fascinated, Meyer set out to build the chess robot, and he successfully completed it after graduating.

Each experience, no matter how different, was impactful, said Meyer, who is grateful he gets to combine his top interests—developing products that users interface with and using machine learning and data to solve problems—in his current position.

“[Mason has] several graduates who have gone on to work at the leading companies in the world—not just Apple, but Google, Microsoft, IBM, Facebook, Amazon, not to mention Lockheed Martin, Northrop Grumman, Capital One, and others,” said Sanjeev Setia, chair of Mason’s Computer Science Department. “We are proud that these companies will hire our graduates—this demonstrates not only the academic rigor and strength of our programs, but also the quality of our student body.”