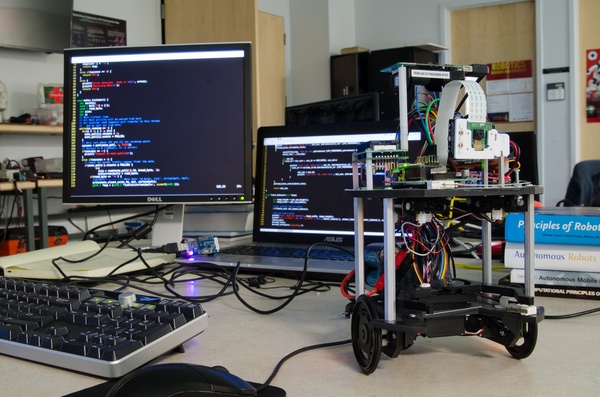 We present an open design for a small, $500 robot suitable for "swarm"-style multiagent research, mobile sensor communications exploration, robotics education, and other tasks.

Our goal is to get as much functionality as possible from $500 per robot, replicate the robot many times to create a small collaborative swarm, and document the results to make it easier for you to do the same. We hope to foster collaboration in the wider community and, ultimately, lower the entry-level costs for building such robots.

Our robot is a roughly circular two-platform differential-drive mobile robot 7" in diameter. The robot is constructed nearly entirely of off-the-shelf material, and is intended to be much more powerful computationally and functionally than most inexpensive swarmbots. Features include:

This project is evolutionary successor to the original Flockbot robot, which was the brainchild of the ECLab Evolutionary Computation Laboratory at George Mason University's Computer Science Department that was constructed by the GMU CS499 (Autonomous Robotics) course. Funding for the equipment behind the original design came from an NSF Major Research Instrumentation grant awarded to George Mason University's computer science department.